So, you know how factory farmed food is full of genetically engineered organisms, petro-chemicals, and drugs? And how it’s then processed and de-natured to become packaged food, and how we then call that “fake food” (because it is)? This entry is not about that.

This entry is about fake food. As in, the kind that does not require quotation marks because it’s really truly not food. The kind of fake food that is often made of plastic by child slave labor in China of petro-chemicals and cancer-inducing dyes, which makes it slightly less appetizing and almost as healthy to eat as “fake food” from Micky D’s.

Only, this particular fake food isn’t from China (mostly) nor Micky D’s, though child slave labor may have been involved. If by “child slave labor” you mean an overly energetic almost-5-year-old who WOULD NOT SHUT UP until we handed him a ball of salt dough and told him FINE he could make some fake food too if he would just leave us alone. 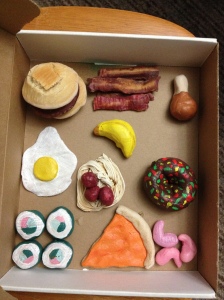 It also contains nothing other than flour (conventionally grown and therefore most likely GMO and chemical-laden), salt (probably from child-slave-labor salt mines), water (treated with chlorine and flouride delivered to the faucet through plastic pipes), and acrylic paints that were probably from China and definitely made with artificial ingredients. Holy crap. I was feeling really good about our accomplishment until  I wrote that sentence. I think I’ll go cry now.

We did mix the salt dough in an old painted tin mixing bowl that belonged to Carey’s grandmother, so that part was good, right? Crap. The paint probably has lead in it.

I am so far off topic here.

What I mean to say is, two of my sons have a birthday this week. Monty is turning 12 and Everett is turning 5. Everett is getting a kitchen for his birthday, which is not quite the same as a pink suitcase since he doesn’t like pink any more, but at least he hasn’t decided yet that cooking is for girls. Seriously, who came up with that idea anyway? In my experience, girls like cooking about as much as boys like mowing the lawn which is to say some do some don’t, and sometimes the girls like mowing and the boys like cooking and geez, people, why do we keep getting hung up on gender issues? Just let the kids like what they like for goodness sake.

Wow, I had no idea a post about a child’s play food could become so politically charged. Please, people. TRY to stay on topic.

Anyway, so I found this amazing deal on a Pottery Barn Kids play kitchen for Everett on craigslist.

It has a working clock. And knobs that turn. AND TIMERS THAT TICK. It was a great deal. But it still kinda blew our little budget. So instead of going out and buying cheap slave-labor plastic food from China, we decided to make cheap sorta-slave-labor-free salt dough food at home. And since it turns out not to have been such a wonderfully ecologically and ethically sound choice (thanks for pointing that out, me), it’s a good thing it at least turned out to be cheap and easy. 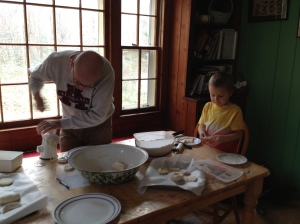 First, we mixed up a batch of salt dough. You can find a recipe pretty much anywhere online, but this is the one we used. Mostly because it was the first one to pop up on Google. That link just saved you two clicks and 17 key strokes. You’re welcome.

Above, you can see the probably-lead-paint-poisoned mixing bowl from Memaw’s estate, and the slaves hard at work making spaghetti and  what is quite obviously, even without the explanation from Everett, a “slice of cheese with an eyeball.”

Here is some of the food before being baked:

Next we stuck it in the oven. You really need a visual on this one. It’s a complicated step and I wouldn’t want to leave you hanging:

You can bake them at 200 degrees to get them dried out, and they’ll stay nice and bone white and not puff up too much. Or you can be impatient and bake them at 300 degrees and they’ll bake much faster and some will puff up and be unusable and they’ll all turn an odd shade of brown, but YOU’LL BE DONE FASTER.

Then you get to paint. Well, that part’s so obvious I’m not going to bother showing you a visual. Mostly because I forgot to take a photograph. Just try to get somewhere in the vicinity of this:

And that, my dear friends, is how you make  fake food that is only very very very slightly more humane, ethical, and environmentally sound than the equally cheap plastic food at Walmart.

11 responses to “On the Topic of Fake Food”