Two: Give him plenty of greenery to hide among. 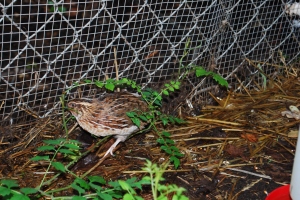 This is Mr. Tumnus

Three: Give him birdseed right before it rains, so he can gorge himself on healthful sprouted grains.

Four: Give him a girl. A pretty one. Or, really, any kind of girl. 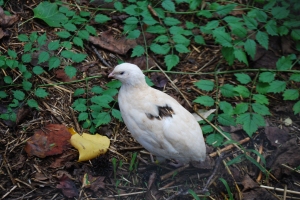 We gave ours a pretty one, don’t you think? She’s also older and about twice his size. Here she’s pictured during her first hour in Quailtopia–in absolute catatonic stillness. I think she was freaked out by the enormity of space open to her. And maybe also the fact that she’d just been ripped unceremoniously from her sisters for the first time in her life, subjected to a frightening journey locked in a tiny cage, and then plunked down in completely unfamiliar territory without a single soul that she had ever seen before.

Not one to dwell on her misfortune, however, once she recovered from her shock she quickly took charge and did the only sensible thing a girl can do in such a situation: She commenced seducing her strapping young roommate.

We call her Mrs. Robinson

I’m sure any normal person or quail can see just how incredibly charming the lady is.

Mr. Tumnus, however, is no ordinary quail. He is, in fact, a rather extraordinary one. Raised in the house, he is incredibly tame and friendly toward humans. Outdoors, he has become accustomed to sleep next to the ducks. Goats do not perturb him. And cats? Pshaw–who’s afraid of a little old black predator with razor-sharp claws and lightening-fast reflexes? Not Mr. Tumnus.

Sadly, however, having hatched alone without brothers or sisters, the poor boy never had an opportunity to develop his social skills. In fact, Mr. Tumnus, unafraid of predators intent on stalking him, is mortally terrified of … other quail.

He spent the first two hours after the arrival of Mrs. Robinson frantically pacing the fence as far away from the terrifying white THING as he could get.

Fortunately, where the young lad’s social education was lacking, hormones (and the persistent advances of our Mrs. Robinson) provided. Eventually, our girl succeeded in getting close enough that he was forced to say “hi.”

And by “hi” of course I mean that he jumped on her back and began furiously–and clumsily–attempting to lose his virginity. I must say that she was quite thoroughly patient with him.

And that, my dear friends, is how you make your guy very, very happy.

Afterglow. What a quail rooster looks like when crowing.

BONUS: There are three much younger girls waiting for their opportunity with Mr. Tumnus, once he’s gained a little experience. I insisted to them that they reach proper sexual maturity before commencing physical relations with him, as is only proper. They are currently housed in a separate pen. 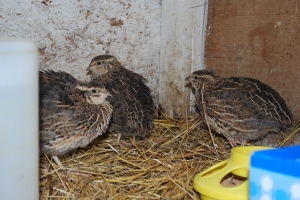 Whitechin, Blackie, and Lucy hamming for the camera

P.S. Mrs. Robinson’s real name is Freckle. Alas, I allowed the children to provide names and they aren’t nearly as clever with them as their mother is. Regardless, when you come for a visit, do remember to address Freckle properly, or she may become offended. Thank you.

P.P.S. I would be remiss were I not to post pictures of the children with their duly named quail. Not one to deprive my readers of an additional dose of cuteness: 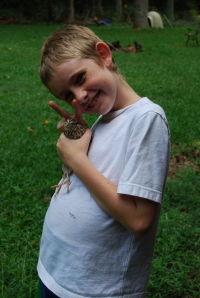 And Everett with Blackie:

We did eventually recapture Blackie in the merry chase that predictably ensued.